When the first white settlers came to this area, they found the natives to be very cooperative in helping clear the land and with the subsequent crop chores. Indians of this region were members of the Nepessing tribe of the Chippewa. They were very friendly and did not violently object to the whites settling in their hunting grounds.

The first recorded settler of the area was Jesse Decker who arrived here in 1825 with his wife from upstate New York. They raised the first frame barn in 1830 with the help of the local Indians and the other settlers. The settlement was referred to as "Decker Settlement", and the town was called Canandaigua, after Canandaigua, N.Y., where the settlers originated.

In 1828, a power dam was built uniting several small lakes and forming the mile wide Lake Canandaigua. The area was promoted as a summer resort and eventually became a year round community. The community's name was changed in 1835 from Canandaigua to Orion with Jesse Decker becoming the township's first supervisor. It wasn't until 1929 that Orion was renamed Lake Orion.

In 1874, C.K. Carpenter purchased Park Island and constructed a reception and dance hall 100 feet long with a tower 80 feet high. Access to Park Island was by bridge or steamer.

Located just north of Pontiac on M-24, Lake Orion is 25 miles north of Detroit. The Palace of Auburn Hills and the Chrysler Technical Center are conveniently located only minutes away. 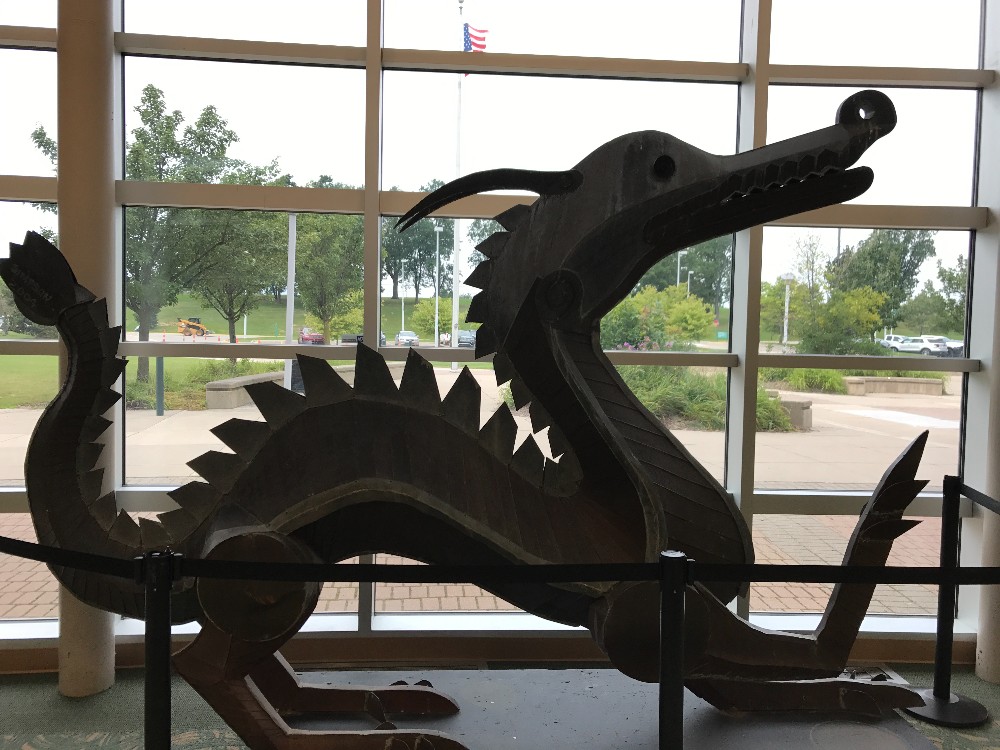 Legend of the Dragon

In 1894, there was a dragon. He took up dwelling in Lake Orion and though seemingly quite a friendly fellow, struck terror in the hearts of residents who sighted him. He grew with each sighting (dragons do this - growing and aging fast, but .... living forever) and increased in size from 18 feet to an outstanding length of 80 feet. He was described by witnesses as green with black spots. He was covered with scales and arose from the deep carrying slime and seaweed.

The fact is that two Orion ladies fishing from a dock in the lake, probably did see the wretched creature rise from the water. This encounter was enough to provoke numerous sightings, some of them undoubtedly real.

The Review newspaper reported an encounter which Mrs. Vincent Brown had while fishing from a rowboat with her two young nieces. When the creature appeared, the brave Mrs. Brown fought him off by beating him on the head with a board. This did not discourage the dragon and she rowed frantically to shore amid the screaming terrors of two frightened girls.

People were afraid to swim in the lake and used the creature as a scapegoat for all sorts of mishaps such as tipped boats and even missing livestock. Some people even claimed to have seen fire breathed from his nostrils.

It is not recorded when the first explanatory statements came out, but there does seem to be an explanation - and a most amusing one.

The Miller family lived at 312 S. Broadway, in those day with two mischievous boys named John Lawson and "Tut". John swears it was his younger brother's doing and that he worked laboriously sewing cloth that would cover wire rings which attached to the wooden base of a sea serpent. The base was fixed with wheels and the monster was lowered into the lake with a wire leash attached.

There are those who doubt that explanation and credit the sightings with nothing more than a shadow cast on the lake by an old tree. Myth, fancy, or fact, the story will be retold for years to come.

Today the Lake Orion high school sports teams are named "The Dragons" for the monster of the lake whose notoriety may never die.

Excerpts reprinted from "The Legend of a Dragon" written by S. April Wuest, published in "Orion Township Sesquicentennial 150 Years 1835-1985"