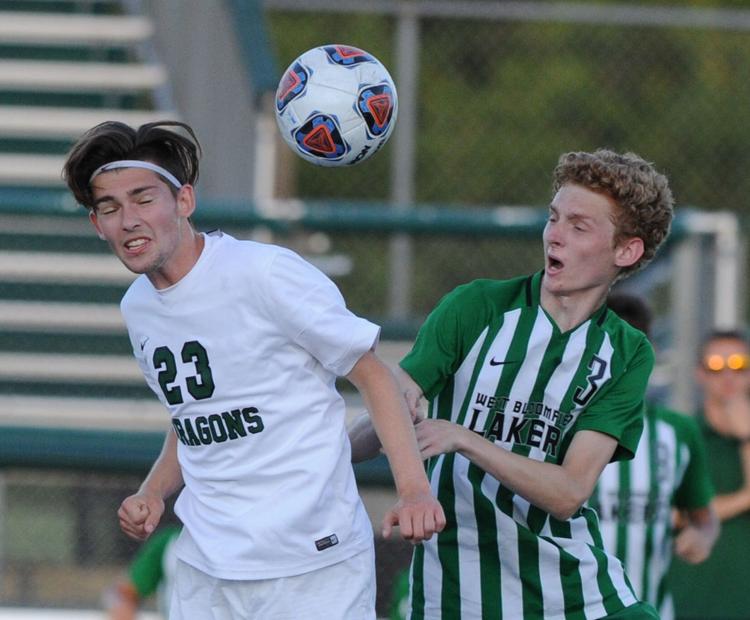 By Michael Wallwork For MediaNews Group and The Oakland Press

WEST BLOOMFIELD >> The Lake Orion Dragons defeated the host West Bloomfield Lakers 1-0 in the Oakland Activities Association White Division opener for both teams.After a feeling out period that lasted the first 15 minutes or so, the pace of the game started to pick up, and it did not take long for Lake Orion to capitalize. Joshua Foley found Lion Zoernack in transition for the Dragons, and Zoernack deftly finished the opportunity, depositing the ball in the back of the net for the game’s only goal“We tell them the first few minutes, let’s play it safe and kind of feel the team out, Dragons assistant coach Jason Wise said. “We were really trying to focus on recognizing when to play it long and when to play it short. It was just about that time when we were starting to recognize that we were able to put one in the goal.

But that was as close as the Lakers could get, and after a very even first half, the Dragons would dominate much of the second half, especially in the early going.

Jacob Lee set the tone for Lake Orion right after halftime when he stole a back pass, charged in on goal, and nearly scored, pushing a shot off the goal post as West Bloomfield goalkeeper Elijah Burlak was off his line and challenged the shot. The Dragons had another gear, increasing the pressure on West Bloomfield in the second half with a high energy, high press style that caused the Lakers problems, especially in the early part of the second half.

“We said hey, let’s get some extra pressure on top, make them play,” Wise said. “They (West Bloomfield) did a good job of handling it, but every now and then something will crack. West Bloomfield still kept the ball out of the goal, but our guys worked hard and I’m happy.”

The Dragons would get a handful of other chances in the half, notching seven shots on goal after half time, most of which came in the first 20 minutes of the second half. Burlak was outstanding in net, however, and came up with several big saves to keep the game 1-0 while West Bloomfield tried to match Lake Orion’s intensity. In all Burlak would finish with nine saves on the night.

The Lakers would eventually even out the play in the final 15 minutes, but they could not break down a strong Lake Orion defense and despite a couple of good set pieces late in the game finished without a shot on goal in the second half.

“They had a little bit more composure, and of course, being up a goal helps them. We felt a little need to push, so we kind of started getting out of our game,” Clark said. “We started to press and see if we could finally get a way through, but they were so organized that it was tough to get around or do the kind of things we normally do.”

With the win, Lake Orion improves to 6-2 overall and 1-0 in OAA White. The Dragons play a crossover game against Rochester Adams on Thursday.

West Bloomfield (5-1, 0-1 OAA White) suffers their first loss of the season after reeling off five straight wins, including the tournament title at Lapeer last weekend. The Lakers have another OAA White game on Thursday when they head to Bloomfield Hills to take on the Black Hawks.

Ethan Van Amstel (24) of Lake Orion keeps the ball from West Bloomfield's Michael
Share to FacebookShare to TwitterShare to LinkedInShare to EmailPrint this page
No post to display.